Envisioning Ecstasy features documentary and conceptual imagery expressing the kaleidoscopic experience of the Kalachakra Initiation and the complexity of life in remote Ladakh, India. The root of the word ecstasy, ek- “out,” and stasis “stand,” conveys the simultaneous outer and inner visions of the two photographers, mirroring the transcendent nature of the Kalachakra teachings. The treasured Kalachakra, “Wheel of Time,” teachings are a once secretive ritual that brought wisdom to the mythical Shambhala and continue to be of great benefit to Tibetans and the world today.

His Holiness the 14th Dalai Lama bestowed the 33rd Kalachakra Initiation in Ladakh, India in July 2014. 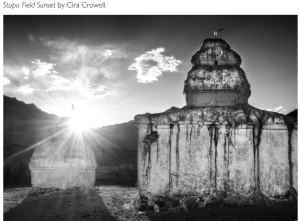 Cira Crowell (MA Savannah College of Art and Design) uses photography, illustration and animation to explore the optical phenomena of visible and intrinsic light. Her travels include Iceland, India, Bhutan, Japan and she recently completed a 250 mile medical trek in remote Himalayan Nepal. Cira received Jukai in 2010 and is a chaplaincy candidate at Upaya Zen Center. She is on the Board of Trustees for the Georgia O’Keeffe Museum and recently enjoyed a successful solo show at the Robert Berman Gallery (Santa Monica). She lives in Los Angeles and Santa Fe. Christopher Michel (MBA Harvard) photographs extreme locations like the South Pole, Everest, The Korean DMZ, Papua New Guinea, and the edge of space (aboard a U-2 spy plane). He has photographed a variety of global leaders, including the 14th Dalai Lama. His prolific work is featured regularly in print, online and was most recently on display at the Louisiana Museum of Modern Art near Copenhagen. Chris is the editor at Explorers, travels extensively and lives in San Francisco.