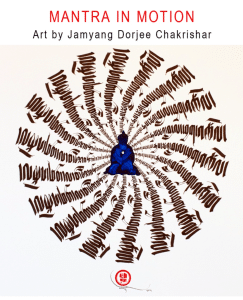 Geshe Tashi Dorjee and monks will conduct Rab-ne puja (blessing ritual) and Tru-sal(purification) to bless the exhibition. The monks will also perform Zok-kay (Throat Chanting) focusing on the meditation of sound and a brief medicine Buddha mantra recitation.

This exhibition presents a series of exquisite, recent works by master calligrapher Jamyang Dorjee Chakrishar. The central theme of the collection is the Medicine Buddha, and Jamyang explores various paths to elaborate the extraordinary and precious healing nature of the Medicine (Blue) Buddha, who comes from the eastern Pure Land – the Lapis Jewel Land. The Medicine Buddha is the supreme healer in Tibetan medicine and holistic healing tradition, a refuge in times of illness, and helps put an end to the three poisons: attachment, hatred, and ignorance. 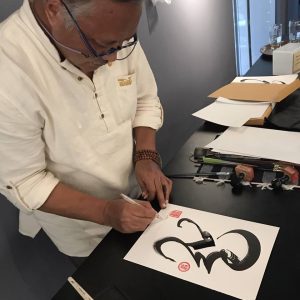 Jamyang Dorjee Chakrishar works with the Conservancy of Tibetan Arts and Culture, an international NGO dedicated to the preservation of Tibet’s living cultural heritage, and holds the world record for creating the longest calligraphic scroll. Jamyang’s calligraphic artworks often serve as meditation tools, have been exhibited internationally, and are included in private collections of His Holiness the Dalai Lama, Lodi Gyari Rinpoche, Richard Gere, Lama Zopa Rinpoche, and others.

Geshe Tashi Dorjee received his doctorate in Buddhism, concentrating in the Five Major Texts from His Holiness the Dalai Lama. He was the former Chant Master of Sera Mey Monastery, one of the largest Tibetan Monasteries in Exile and has performed throat singing/chanting at  Carnegie Hall in New York.