Buddha Within You
January 1970

Buddha Within You: An Exploration of the Mind Within
Ngawang Jorden 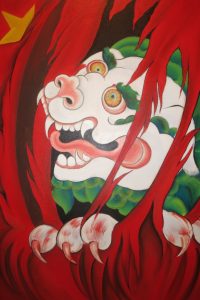 In this exhibition, artist Ngawang Jorden explores four themes: man’s universe and mental patterns, traditional Tibetan symbol­ism, political imagery, and the relationship of humans with nature and technology In his paintings, Mr. Jorden tells the story of humans trapped in samsara, repeating the same actions under different circumstances at different points in time. He employs a meticulous classical technique. influenced by traditional Tibetan Buddhist art themes. fused with organic and natural forms. Ngawang Jorden is a Tibetan artist and thangka painter born in Tawang, birthplace of the sixth Dalai Lama. He attended the Sera Monastery and lives in Boston. As a Tibetan political activist and community or­ganizer, Jorden interprets current and his­toric socio-political events and human be­havior in combination with ideas from his life as a shepherd. monk, a stupa builder and carpenter.