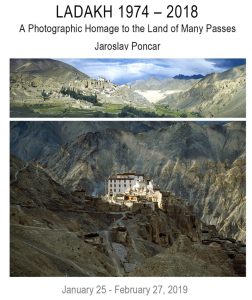 Tibet House US is pleased to announce its forthcoming, winter, gallery exhibit: Ladakh 1974 – 2018: A photographic homage to the Land of Many Passes, featuring the works of noted photographer, Jaroslav Poncar, who has spent considerable time traveling through, and photographing, Ladakh, a sparse and captivating Buddhist land.

Ladakh (“The land of many passes”) is a mountainous region, located in the Indian state of Jammu and Kashmir, and is known for its uniquely beautiful landscape and Buddhist monasteries. It is inhabited by people of Indo-Aryan and Tibetan descent, although quite sparsely populated.

“After my winter trip, to Ladakh I had the feeling that my photographs of the gigantic Himalayan landscape did miss something, and that I should, like travelers in the early 20th century, bring a panoramic camera on my next trip. This happened in the summer of 1976. On my first trek in the Himalayas, to Zanskar, I brought with me an antique Russian FT-2. By a very lucky coincidence, the Dalai Lama came to Ladakh in September of 1976 to deliver the Kalachakra. I did not miss the opportunity and, one day, I took a panorama of the listeners, probably the biggest gathering of Ladakhis in history. The panoramas I brought home from this journey were very satisfying and, since then, I became a passionate panorama photographer.“

Born in Prague in 1945, Jaroslav Poncar lives in Cologne, where he was a professor in the Department of Imaging Sciences at the University of the Applied Sciences until his retirement in 2010. His photography travels have taken him to the Himalayas and Tibet, Central Asia, India, and Cambodia, and he was among the first Westerners permitted to travel to Ladakh after it was unexpectedly opened to foreign visitors in 1974.  The present retrospective spans more than three decades, documenting the stunning beauty of Ladakh’s landscape, as well as its continued commitment to preserving its Buddhist culture.

Since 1976 the artist has pursued panorama photography, employing an original Russian FT-2 camera on his journeys. His publications, which include Ladakh: Land of the Passes; Tibet: Gateway to Heaven; Alchi: Ladakh’s Hidden Buddhist Sanctuary; Himalayas: Where Gods and Man Meet; Himalayas: Forty Years of Travels on the Roof of the World; and Tibet: Looking Back, have won many awards.