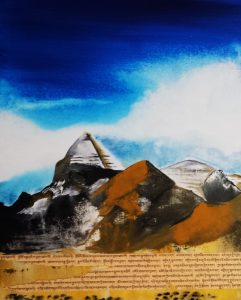 Chungpo Tsering’s work blends political and cultural themes to visualize the political oppression of his homeland and national identity. By incorporating elements such as Tibetan script, Tsering’s abstract paintings evoke a sense of collage, and trace the artist’s emotional perspective on what it means to be Tibetan in the current political climate and without any geographical permanence.

Chungpo Tsering was born in Dhingri, Tibet in 1979, later living in India, Korea, and Nepal before receiving political asylum in the United States. An early participant in the movement of Tibetan contemporary art in Nepal, he was the subject of a solo exhibition titled Charcoal Paintings at the Indigo Gallery in Kathmandu in 2001.

In 2004, he founded and opened GOMA (Gallery of Modern Art), the first gallery of contemporary Tibetan art in Nepal, which was later forcibly closed given the political nature of the exhibitions. Shortly thereafter, Tsering was invited by the Korean Ministry of Arts and Culture to participate in a yearlong residency hosted by the Korean National University of Art. His work has been widely exhibited in Hong Kong, Thailand, Nepal, Korea, and throughout the U.S. Tsering currently lives and works in California.