Join us in-person at Tibet House US Gallery for the opening reception of Sarasvati’s Gift: The Art & Life of a Modern Buddhist Revolutionary, an exhibition of work by renowned artist Mayumi Oda. She will be joined by special guest Robert A.F. Thurman, President of Tibet House.


Known as the “Matisse of Japan,” Mayumi Oda is a painter, environmental activist, and Buddhist practitioner whose life reflects both the brilliance and shadows of modernity. Sarasvati’s Gift explores her tremendous artistic talent and inspiration drawn from her Buddhist practice and her commitment to healing the planet.

“Sarasvati’s Gift, Mayumi Oda’s great gift—how wonderful to receive it in this beautiful, heartfelt, honest book. Sarasvati, the goddess of art, the Lady of the River of Beauty, is the cleansing divine flow of the waters of truth and beauty, and she emanates to heal and cleanse our stressed-out lives on our stricken planet through the undaunted art and golden heart of Mayumi Oda.”
— Robert A.F. Thurman

Signed copies of Sarasvati’s Gift: The Autobiography of Mayumi Oda—Artist, Activist, and Modern Buddhist Revolutionary (Shambhala, 2020) will be available at the event. 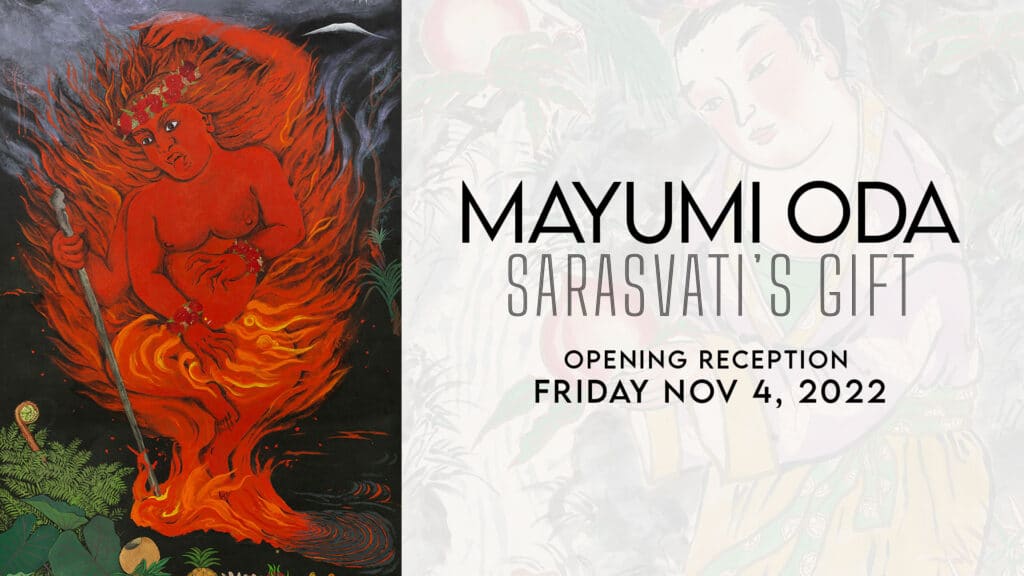 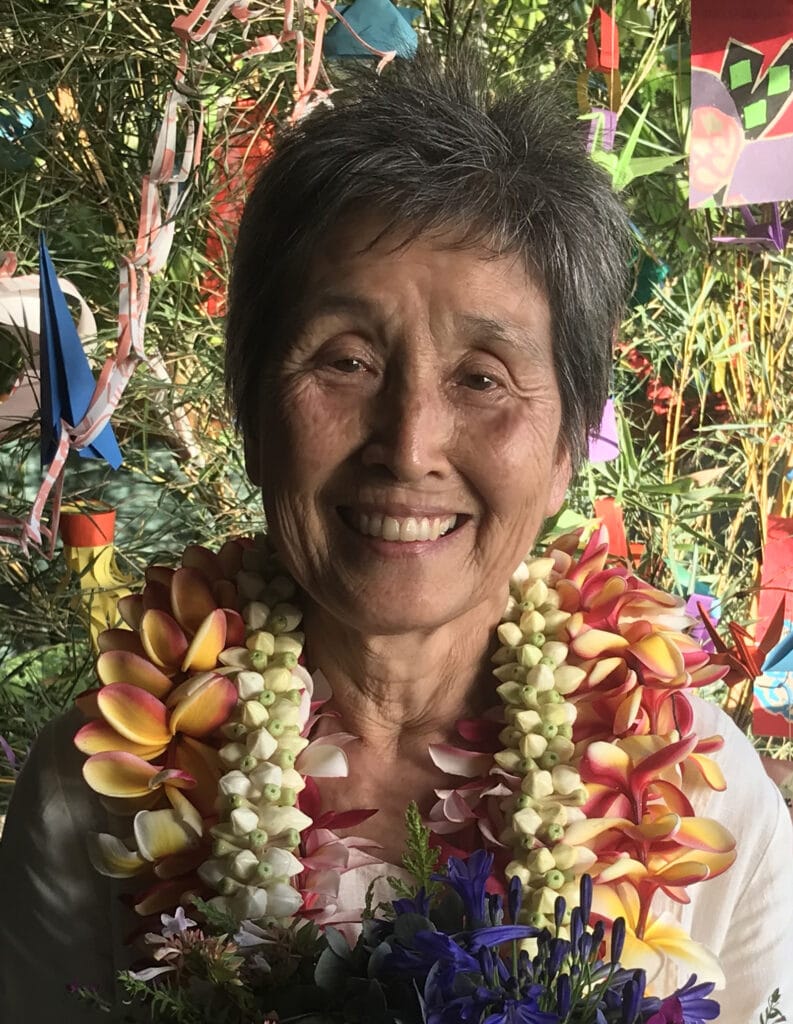 Mayumi Oda’s storied life as an artist began as a small child as her mother sought to bring joyful creativity early in her daughter’s world. That nurturing instilled a desire to make her mother happy and so, becoming an artist was born of mutual love and an innate knowing rather than a conscious decision. Drawing for hours each day for years in school formed a discipline while honing Mayumi’s eyes, hands, and mind to draw anything that she wanted. As a Zen Buddhist, Mayumi’s father also imbued the importance of concentration and being present – things she embraced even more as an adult practicing Zazen meditation. This was the preparation for a prolific and evolving artistic journey in the forthcoming decades.

Intensely spiritual, sensitive, and yet, exceptionally strong-willed for a Japanese woman, Mayumi has always painted authentically, from the heart, never for commercial appeal. As a young woman and emerging artist, Mayumi was highly inspired by female beauty.  Painting Goddesses contributed to an inward self-awareness while presenting an outward, positive expression of feminism. During different periods as a woman, wife, and mother, painting served as an escape, awakening, or expression when life presented challenges and opportunities.  As her art received greater attention, travel, and exposure to more people and influences have ensued for many years leading to diverse subjects, styles, and collections comprising several hundred paintings. She has come to be known as the “Matisse of Japan”.

From 1969 to the present, Mayumi has presented multitudinous solo and group shows internationally and has numerous private and permanent collections at the Museum of Modern Art, New York, the Museum of Fine Arts, Boston, the U.S. Library of Congress, and many more. Mayumi has reached unparalleled artistic success for a Japanese woman of her time.

Sarasvati is a river goddess in India. In Japan, we call her Benten or Ben-
zaiten. Originally she was the goddess of art, music, and poetry, and later
she also became the goddess of learning.
She came to Japan, in tandem with Buddhism, around the eighth cen-
tury and became an especially popular goddess with the Shugendo, the
mountain shamans. As a river goddess, her energy flows from high to low,
like money, so she also became the goddess of commerce and the protector
of merchants, to help them conduct ethical business. Musicians and healers
paid homage to her too.

Hariti, also called Kishimojin, was an ogre and the wife of a wealthy mer-

chant who lived in Buddhas time. She was thought to have eaten about five

According to legend, Buddha took Haritis child and hid him from her.

Losing her own child, she realized what she had done and felt remorseful.

To quench her thirst for the flesh of children, Buddha gave her the

pomegranate, which resembled the taste of flesh. Each morsel of the pome-

granate reminded her of the sin she had committed. Hariti became the

guardian of children with disease, particularly protecting them from

Kannon on the Carp

My beautiful mother resembled Quan Yin. She was a big, ample woman

Right after World War II, it was a very hard time for our family. She

made all the clothes for us children. She served my rigid grandparents and

made delicious food. It wasn’t easy, but she tried to make a good life possible

for us. She made everything- the dresses, the food–with such creativity.

To me, the image of Quan Yin is my mother herself. I feel very fortunate

to have been raised by my mother.

I have been told that Green Tara was born from Avalokiteshvara’s tears.

So, I painted Green Tara holding two peonies, which are shedding tears.

She sits with a green dragon, who is the guardian of Dharma. Traditionally

dragons are depicted as quite fierce, but I wanted this dragon to be more

She sits in a half lotus with one leg already moving forward, to get ready

for action. She’s not fully in meditation- she’s ready to get up to save all of

Tara is a compassionate goddess, the mother of all Buddhas. When you

‘The feminine part of Christianity is expressed through Madonna, but many of the depictions show her as pale, emaciated, and sad. I learned that Madonna, together with Mary Magdalene, were practitioners of the Isis tradition. And since she is a Semite, she would be dark-skinned. I really wanted to paint a dark, healthy mother of compassion, to bring her back in a way that reflected my way of seeing her. Learning more about the Isis tradition has led me to believe that the true teachings of Jesus may come from it.

In order to secure oil from the Middle East, the United States reacted to
the Iraqi invasion of Kuwait by launching the Persian Gulf War in 1990
under George H. W. Bush. It was during the Gulf War that the military
started using war machines-~-tanks, guns, and bullets–made of depleted
uranium. This is when I realized that all wars were simply about securing
access to power sources.
Later, Gulf War syndrome was identified–a chronic and multisymp-
tomatic disorder involving cancer, liver disease, fatigue, headaches, skin and
respiratory problems, and reproductive health problems. The syndrome
affected and continues to affect servicemen and servicewomen and civilians
from various countries involved in the war. Many children were born with
birth defects in the area where the war was fought.

My painting of Niutsu depicts a vision described by Hamamoro
Matsuzo, a visionary in the 1950s who imagined Niutsu as a savior of
modern Japan. She is a red deity, riding on a mule and crossing over a river
where a volcano is erupting. I was imagining a time when a lot of eruptions
were occurring–a time when the earth was angry. A braided straw rope,
or shimenawa, hangs above her head. It traditionally defines a sacred space
(kekkai), or the territory of the gods. It is similar to the kapu in Hawaii
Kapu defines a space that is off-limits, sacred, and needs to be treated with
respect.

‘The Dakini were originally lower-class women who worked on funeral
rites, chopping up bodies with cleavers before putting them up on the sky
burial platform. So, in this painting the Dakini is holding a cleaver.
This Dakini helps you visualize your body, the symbol of selfhood, being
chopped by a cleaver and put into a cauldron made of a skull. The body
burns with a cleansing fire and becomes the amrita, or nectar, offered as a
practice of complete surrender to Dharma.
She balances with the trident of three skulls, presenting the three poi-
sons of anger, greed, and ignorance.
At a time when I was exploring who I am, the Dakini became a great
teacher, and I painted this thangka.

For the fiftieth anniversary of the tragic events at Hiroshima and Naga-
saki, I painted this representation of the goddess of the hell realm, Lady
Yamantaka, praying while sitting on a black bull. (In Tibetan thangkas,
black is depicted as dark blue.) She has three faces depicting anger, joy, and
serenity. In her left hands she holds a trident and a rope. In her right hands
she holds a teaching stick and a sword.
I exhibited her in 1995, taking her all over the world. As a thangka, the
image was easy to roll up and travel with, and we used it to express the work
of Plutonium Free Future.
Yamantaka is the Tibetan counterpart of the god Pluto; both are guard-
ians of the hell realm. Pluto was very strong in my astrological chart in 1995.
I drew Lady Yamantaka, my Pluto, in a golden garden with a headband of
skulls.

Mount Shasta is called the “mountain of Nu Chumash,;” as the goddess
of the Chumash Indians. The source of the headwaters of the Sacramento
River Rows out from her stomach. When I drank this water, my body was
cleansed, my heart was supported, and I felt very strong. I visited Shasta
often, to collect water and carry it with me to Japan.
I painted the Japanese Kukuri goddess. In this painting, I depicted the
Japanese Kukuri goddess, also known as White Mountain Goddess, in
a redwood forest, carrying a black pottery water vase of the Pueblo style,
decorated with a bear paw. I also painted a waterfall, flowers, and frogs, like
the ones I saw every day on Mount Shasta.

When Saint Köbö-Daishi (Kakai) brought Shingon Buddhism to Japan,
he came with wrathful deities guarding the Dharma. One of the wrathful
deities was named Fudo Myo-0.
I felt righteous anger toward the nuclear patriarchy, toward the civiliza-
tion that doesn’t take care of the lives of women and children and life itself,
and I needed to express that. I wondered,” What if Fudo was depicted as a
female? What would she look like?”
Fudo sits on a cremation ground. Her passion is so strong that it burns
like a fire behind her. She carries a rope in her left hand, and in her right
hand she h

After the Fukushima Daichi nucieat meitdown, our fears became a reality.
People in Fukushima are now standing up and showing their righteous
anger, demanding that the government and the power industry tell the
truth.
But even so, they still have to live with this situation, which is so unfair.
Fukushima was farm country. There were orchards, chickens, dairy farms,
and beautiful rice felds. It’s a famous region for growing cherries, apples,
pears, and vegetables. A lot of food came from Fukushima, and it was
sold all over Japan. Now their earth is so contaminated they can no longer
farm there, and besides, people don’t want to buy food from Fukushima
anymore.