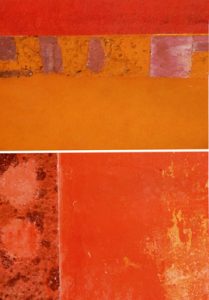 Alchemy of Light offers an investigation of consciousness, with light as its primary metaphor. Alchemy refers to Jung’s theories on the psychological process of transmutation through conflict. Conover works in the tradition of abstractionists like Malevich and Agnes Martin, viewing art as an investigation into reality’s unchanging core.
Conover’s use of color evokes a complex state of sensual anticipation and symbiotic calm. The natural world serves as her inspiration. The paintings are constructed from the relationship between the light of physics and an inner light, or pure consciousness, both of which lie beyond space and time.

‘Light is a presence that illuminates and transcends representation. Of all sensory experience, the immediacy and raw intensity of light bonds me to my subject in moments of intense being.’
– Mary Conover

‘Light creates the world. It is the more subtle than gossamer substance of everything – ourselves, mind, speech, and body, all beings, visible and invisible, all universes, nebulae, galaxies, stars, solar systems, molecules, atoms, subatomic energies, inconceivable quanta and qualia. Itself it is the solid, the liquid, the fire and the moving wind, and all the beyond as well.’
– Robert A.F. “Tenzin” Thurman

Alchemy of Light offers an exploration of consciousness through painting and montage. Conover works in the tradition of abstractionists like Malevich and Agnes Martin, viewing art as an investigation into reality’s unchanging core. Her use of color evokes a complex state of sensual anticipation and symbiotic calm, as the “living light” of the natural world serves as her inspiration. In abstractions that reveal fine technical ability, the artist has located the search for self in the beauty and danger of untamed water and implacable desert. Photographic montages set in long stretches of gossamer fabric reflect ladders – symbolic bridges providing access to higher levels of being.

Conover draws her inspiration from various luminaries of consciousness, including Carl Jung, who shares a personal connection with her family. The medieval practice of alchemy captivated Jung in his studies of the human psyche. He saw it not only as a bridge to the past but also the future, the modern psychology of the unconscious. To Jung, alchemy was a symbolic representation of uniting the unconscious with the conscious – and with personal transmutation through conflict.

Alchemy also finds resonance within Tibetan culture, another source of inspiration for the artist. Instead of denying dark energy, the spiritual practice of tantra transmutes it into the transcendental experience of bliss and wisdom that cuts through the darkness of ignorance.

Conover’s works are constructed from the relationship between the light of physics and an inner light, or pure consciousness. In her words, “Light is a presence that illuminates and transcends representation. Of all sensory experience, the immediacy and raw intensity of light bonds me to my subject in moments of intense being.”

The work for this exhibition began to develop many years ago. Each piece has a story and is the result of a multidimensional practice using photography, painting, and assemblage. As an artist, my paintings inform my photography and vice versa. While the paintings here primarily explore light, both as physical phenomena and metaphor for consciousness, the photography bears witness in a different sort of way. Light, as it exists in time and space, is captured in an instant. Both mediums have as their subject the transcendent “I” of the absolute, mingled with the substance of light itself.

The large fabric constructions, rich in complex imagery and symbolism, are a departure for me. The reference to ladders in this series comes from my investigations into symbols of consciousness throughout history. The evolution of human spirituality and consciousness ascending and descending a ladder is also a symbol for what is known as the “Axis Mundi”, or world center, in many cultures, religions and cosmologies. The modern scientific images of the body (an actual bone density scan) struck me in particular as a perfect symbol of this concept.

These pieces are made of specially prepared transparent fabrics which allow for the transmission of light as well as printing. The use of fabric resonated for me with the Tibetan tradition of using thangkas and prayer flags as objects of, and for, meditation, typically carried by monks over long distances. As spiritual and utilitarian art forms, they inspired many contemplative hours of careful construction, so very different from my usual means of expression!

As with prayers and mantras sent out into the world on the winds, I humbly present these works. May they bring happiness, a sense of peace and quietude to those who encounter them.

Conover has explored he symbolism of light as consciousness in her prolific studio practice of painting, collage, photography and digital photomontage. She grew up in Virginia and Washington D.C. and has spent many years painting in the French West Indies. Formal education and apprenticeships with master artists have been punctuated with extensive international travel and ongoing study of yogic philosophy. She studied at the Philadelphia College of Art, the School of the Museum of Fine Arts, Boston, and the Corcoran School of Art in Washington, D.C. Conover graduated Phi Beta Kappa from the University of Washington in the biological sciences and has worked as  a scientific illustrator and freelance photojournalist for Conde Nast Publications.

Early experiences as a documentary photographer in unstable, foreign locales sharpened her political and visual awareness. A disciplined meditation and yoga practice brings balance to this propensity for risk-taking. Both show up in the effervescent beauty of her work, synthesizing scientific and spiritual inquiry with a passion for open wilderness.
Conover’s philanthropic work focuses on conservation issues in the West; she owns and manages one of the largest organic ranches in Colorado. She has made her permanent studio in Basalt, Colorado. The artist has graciously made her show at Tibet House into a fundraiser for Tibet House US.