*For international orders (outside of USA), please contact us

“If we really want the next millennium to be happier, more peaceful and more harmonious, we will have to make the effort to make it so. This is in our hands, but especially in the hands of the younger generation.”
– H. H. the 14th Dalai Lama, 2000 c.e.

“I have led the Tibetan freedom struggle on a path of nonviolence and have consistently sought a mutually agreeable solution with China through negotiations in a spirit of reconciliation and compromise.”
– H. H. the 14th Dalai Lama, 2001 c.e.
“In Tibet today, even if people have a fire inside, they are unable even to release the smoke. Therefore, it is up to those of us in free countries to make the situation in our homeland clear.”
– H. H. the 14th Dalai Lama, 2016 c.e.

Why the “life story” of the Dalai Lama? It is a story of one man taking on an empire, calling for truth, peace, and justice for his Tibetan people. Here in full color for the first time, people can come to know the whole drama of his lifelong struggle.

Since the age of 15, the Dalai Lama has defended his people against one of the last great empires, the People’s Republic of China. Under its “dictatorship of the proletariat,” China began to invade Tibet in 1950, decimating and then continually oppressing its people. Since colonialism cannot be practiced in our era of self-determined nations, China always maintains that the Tibetans are a type of Chinese, using propaganda and military power to crush Tibet’s unique culture and identity. Yet the Dalai Lama resists by using only the weapon of truth—along with resolute nonviolence—even worrying some of his own people by seeking dialogue and reconciliation based on his more realistic vision. 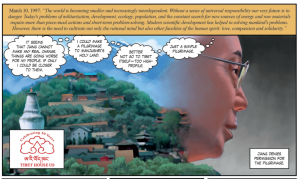 The great fourteenth Dalai Lama of Tibet has become the first global Dalai Lama, a prominent transnational leader of all who want to make the dramatic changes actually necessary for life on earth to thrive for centuries to come. Considered the incarnation of the Buddhist savior Chenrezig or Avalokiteshvara—archangel of universal compassion—he is believed to appear in many forms, at many different times, whenever and wherever beings suffer. Representing the plight of his beloved Tibetan people to the world, he has also engaged with all people who suffer oppression and injustice, as recognized in 1989 by his being awarded the Nobel Peace Prize. His life is thus an example for the world of an individual who never gives up, speaks truth to power, and returns love and kindness for anger and violence.

Along with many scientists, the Dalai Lama teaches that we need to stop poisoning the environment and change from insatiable consumerism to a sustainable lifestyle; that we need to stop the war culture that uses violence to conquer others, and change our armies into peace corps, resolving conflicts through dialogue and compromise; and that we need to discourage all religious and ideological extremisms and educate all people to better understand one another. Most importantly, the Dalai Lama walks his talk throughout these pages, as he has throughout his life, and he radiates a powerful hope that we can and will prevail.

With #ManOfPeace as a labor of love, William Meyers has worked for twenty years to fulfill his late wife’s dying wish to make the story of the Dalai Lama’s heroic life better known to the wider world through the form of the graphic novel. Robert A. F. Thurman is an eminent scholar of Asian and Tibetan history and Buddhist arts and sciences. He has been a close student, colleague, and personal friend of the Dalai Lama for over fifty years and has brought to bear his knowledge of the human realities of his good friend’s life and deeds. Michael G. Burbank has dedicated his life’s work to making Tibetan Buddhist culture more widely accessible to his and future generations through his work at Tibet House’s Menla Mountain Retreat (www.menla.us).