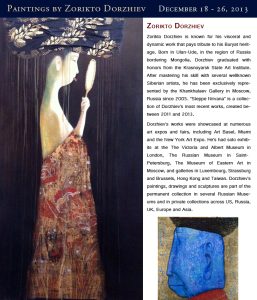 Zorikto Dorzhiev is known for his visceral and dynamic work that pays tribute to his Buryat herit­age. Born in Ulan-Ude, in the region of Russia bordering Mongolia, Dorzhiev graduated with honors from the Krasnoyarsk State An Institute. After mastering his skill with several wellknown Siberian anists, he has been exclusively repre­sented by the Khankhalaev Gallery in Moscow, Russia since 2005. “Steppe Nirvana” is a collec­tion of Dorzhiev’s most recent works, created be­tween 2011 and 2013.