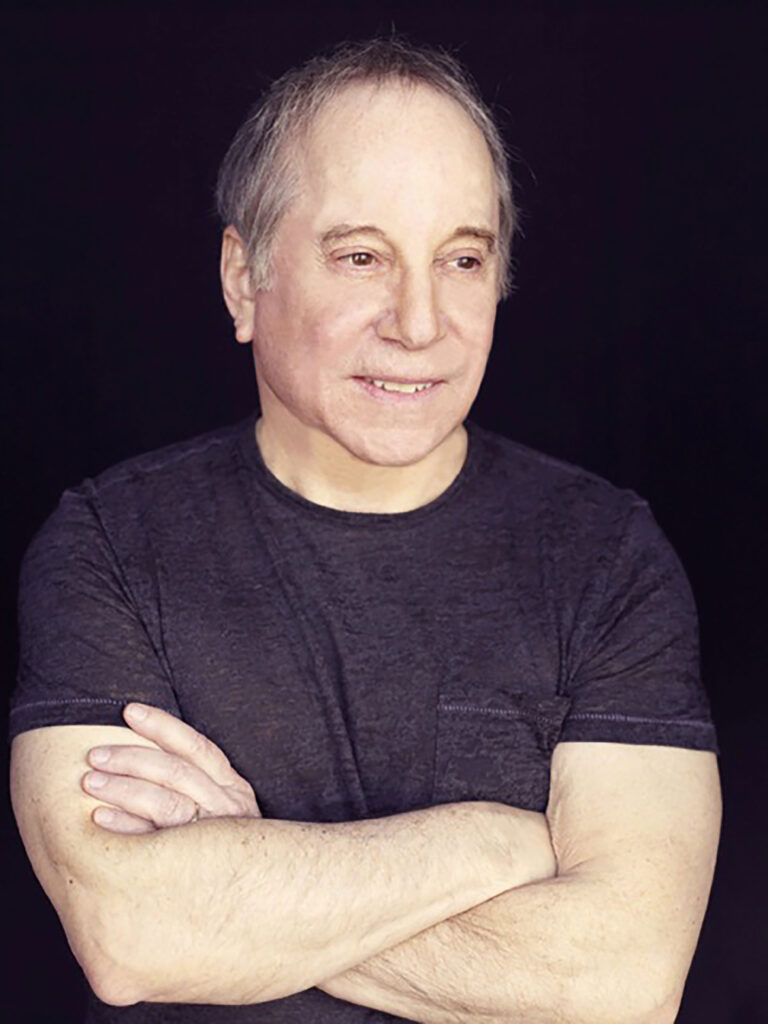 During his distinguished career spanning six decades, musician and songwriter Paul Simon has produced timeless masterpieces, such as Bridge Over Troubled Water, Sounds of Silence, and Graceland. He has received 16 Grammy Awards, including a Lifetime Achievement Award for his work as half of the duo Simon & Garfunkel. Simon has been twice inducted into the Rock & Roll Hall of Fame, and is a member of the Songwriters Hall of Fame. His song “Mrs. Robinson,” from the film The Graduate, was named in the top ten of the American Film Institute’s 100 Years, 100 Songs.

The Library of Congress awarded Paul Simon its inaugural Gershwin Prize for Popular Song, which recognizes the profound and positive effect of popular music on the world’s culture. In 2006, he was named one of Time magazine’s “100 People Who Shape Our World.” Simon is also a recipient of the Kennedy Center Honors, and was elected to the American Academy of Arts and Sciences in 2011. In 2019, he was the first musician to be presented the Great Americans Medal by the Smithsonian’s National Museum of American History.

Simon’s varied philanthropic work includes the co-founding of the Children’s Health Fund (CHF), which, over a period of 30 years, has donated and staffed 53 mobile medical units that bring health care to low-income children and their families in urban and rural locations around the United States. Since its inception in 1987, CHF has provided five million doctor/patient visits. In the wake of Hurricanes Andrew and Katrina, it was a primary health care source for those communities decimated by the storms.

In June 2017, net proceeds from Simon’s month-long U.S. concert tour were donated to benefit the Half-Earth Project, an initiative of the E.O. Wilson Biodiversity Foundation, which is committed to stopping the species extinction crisis by conserving half the planet’s lands and oceans.

During Paul Simon’s 2018 Homeward Bound – The Farewell Tour, he left a financial gift in each city he visited on tour, as a thank you to those cities, and benefitting local environmental and youth organizations. The Homeward Bound tour culminated in New York with a $1 million gift to the NYC Department of Education and Fund for Public Schools, to invest in music and art programs. In partnership with the Department of Education, the Paul Simon Music Fellows Program was created to promote comprehensive musicianship for New York City’s students through advanced teacher training and collaboration with professional musicians.

Having retired from touring, Simon continues his commitment to occasionally perform and to donate those earnings to philanthropic organizations dedicated to environmental welfare, and to preserving species biodiversity. In 2019, he performed concerts in San Francisco and Maui, donating net proceeds of more than $1.1 million to benefit local environmental organizations San Francisco Parks Alliance, Friends of the Urban Forest, Auwahi Forest Restoration Project, and Kua’āina Ulu ‘Auamo (KUA).