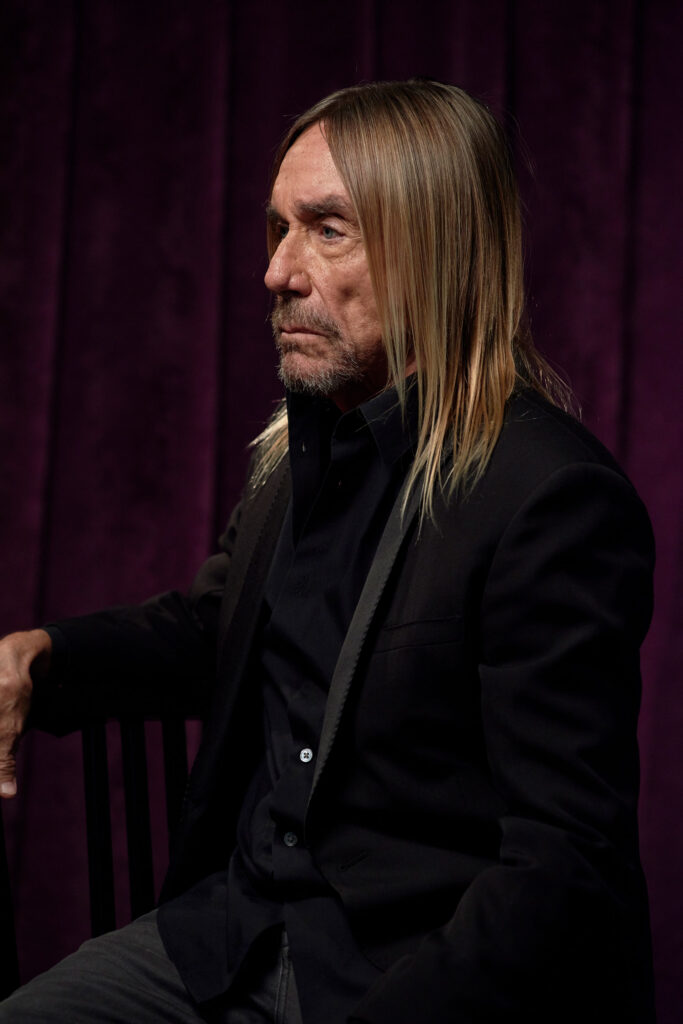 There’s a reason why many consider Iggy Pop the godfather of punk – every single punk band of the past and present has either knowingly or unknowingly borrowed a thing or two from him and his late -’60s/early-’70s band, The Stooges.

Widely acknowledged as one of the most dynamic stage performers of all time, Iggy Pop pre-figured both ‘70s punk and ‘90s grunge and has built a legendary career filled with both critical acclaim and fanatic cult success. Many say you should put seeing Iggy rock out on one’s “must see” list – his fans of all generations are the first to testify to that.
There are never-ending migrations back to the Stooges three seminal LPs, starting with the classic self-titled debut of 1969, The Stooges, 1970’s Funhouse and 1973’s Raw Power, while some of Iggy’s iconic solo albums including Lust For Life, The Idiot, New Values, Zombie Birdhouse, Blah Blah Blah, Brick by Brick, American Caesar and the more recent Skull Ring, Preliminaires and Apres, along with many featurings and cooperations, have cemented his status as a true music innovator. First two of his solo albums were co-written and produced by David Bowie – collaboration widely discussed as one of the most epic musical alliances.

Some of those albums produced anthemic sounds like The Passenger, commercially successful collaborations like Candy (with Kate Pierson) and hits featured in cult movies (Lust for Life, Repo Man and In the Death Car).

In 2010, Iggy and the Stooges were inducted into the Rock and Roll Hall of Fame and in 2020 Iggy received a GRAMMY Lifetime Achievement Award.
Iggy made a welcome solo return in 2016 with his Post Pop Depression album which is a result of a highly acclaimed collaboration between Iggy and co-creator Josh Homme (man of many talents: multi-instrumentalist, songwriter and bandleader of Queens Of The Stone Age) who, produced a record that definitely takes its place in Iggy’s storied discography. “One night, one time only” Tour resulted in an incredibly powerful LIVE at Royal Albert Hall DVD (Best Live Music Film Award at UK MVA 2016). Post Pop Depression was nominated for a Grammy Award in “Best Alternative Music Album” category. A documentary American Valhalla on the making of the album and the subsequent tour hit movie theatres in 2017. 2016 also marked the release of “Gimme Danger”: much anticipated documentary on Iggy and The Stooges by Jim Jarmusch followed by Jeff Gold’s book “Total Chaos” encapsulating the rise and fall of the band.
Iggy’s various film work gathered momentum in 2017: song “Gold”, Iggy’s collaboration with Danger Mouse, was nominated for a Golden Globe. “To Stay Alive: A Method” movie with Michelle Houellebecq was screened at several festivals to critical acclaim. Iggy also worked with Oneohtrix Point Never on a soundtrack for a Safdie Brothers movie “Good Time” which won the Soundtrack Award at the 2017 Cannes Film Festival.

In 2019 Iggy released a contemplative and reflective album FREE. While it follows the highest charting album of Iggy’s career, Post Pop Depression, it has virtually nothing in common sonically with its predecessor—it explores more jazz-oriented genres. “This is an album in which other artists speak for me, but I lend my voice,” Iggy says of his collaboration with New York based artist Leron Thomas and Sarah Lipstate a/k/a Noveller. Cover art reflects the concept of “being free” and is a shot taken from a short film “The Dawn” starring Iggy directed by NP Novack.
Pop continues to host his popular weekly radio show “Iggy Confidential” on BBC 6 Music and – with what seems to be his mission from the very beginning of his career – introduces new music to open- minded listeners.